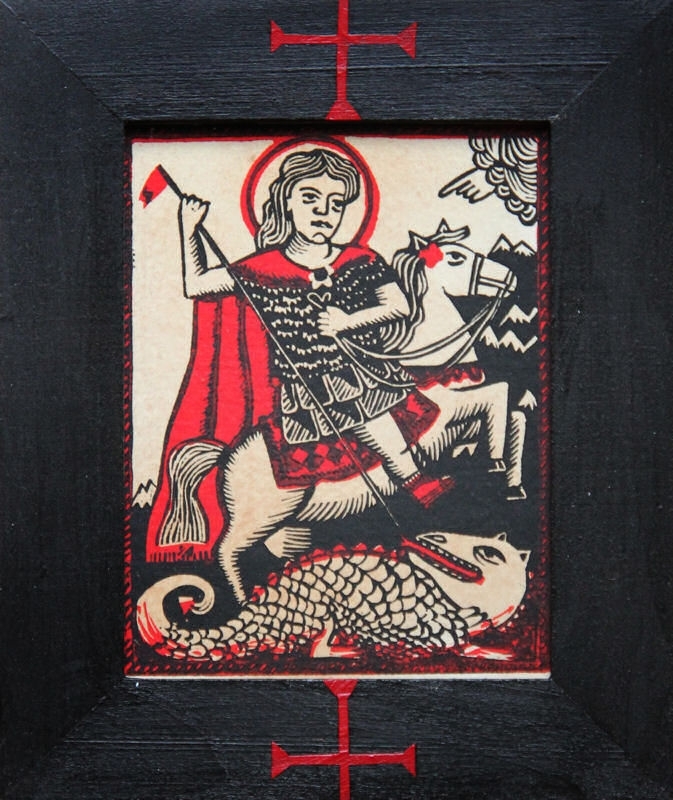 Born in 1983 in Gorodek, and a graduate of the Academy of Art (his specialisation – monumental painting), he currently works at the A. Szeptycki National Museum in Lviv. According to Bryndikov, an encounter with this kind of art is an important challenge: “Reproducible art has long interested me, and since I began working at the National Museum in Lviv I’ve familiarised myself with folk art, naive art. Predominantly created by amateurs, this kind of art inspires reflection and encourages creative pursuits”. Bryndikov recalls his first infatuation with folk art: “Having seen woodcuts from Płazów, I tried to recreate them. The artistic process was so engaging that I can’t imagine my creative life without woodcuts”. It was the graphic images pressed into boards and used in the 19th century in the family workshop of the Kostryckis in Płazów (near Lubaczów in the Podkarpackie voivodeship) that became the inspiration for his first woodcut block. The process of cutting it out – a painstaking battle against the resistant material – is for the artist the first, but also the most important step of producing the final image. “Only the line and the ink, and nothing more. Prudence in the means of expression produces perfect woodcuts, which in turn produce perfect pictures”, the artist claims.

However, Bryndikov did not limit himself to copying older images. In time he began creating his own images inspired by folk motifs. That which most captivated Bryndikov in folk art and which also became his signature artistic style were simple forms and unique ornamentation.

The artist also highlights another important quality of graphic art: “A significant characteristic of a woodcut print is that very often the owner can independently decide what changes to make and can decorate and colour images according to his/her own taste”. For Bryndikov, this makes possible the creation of a specific relation between the author and the owner of the image.

In his works, Oleksandr Bryndikov draws inspiration from the iconographic tradition of Christ and Mary, and from hagiography. Traditional folk images serve as his models. He often colours his impressions with transparent paints and with a limited colour palette, a practice that also references traditional images. Additional ornamentation can be found on his pictures’ margins – they are either painted or stamped, creating rich and often colourful frames that complete the whole composition. Sometimes Bryndikov unifies woodcutting with printing on fabrics, with the hope of resurrecting forgotten techniques.

Recently the works of Ukrainian artist Bryndikov were displayed at the exhibit “Folk woodcuts in the Lviv art collection” in the Ethnographic Museum of Lviv.