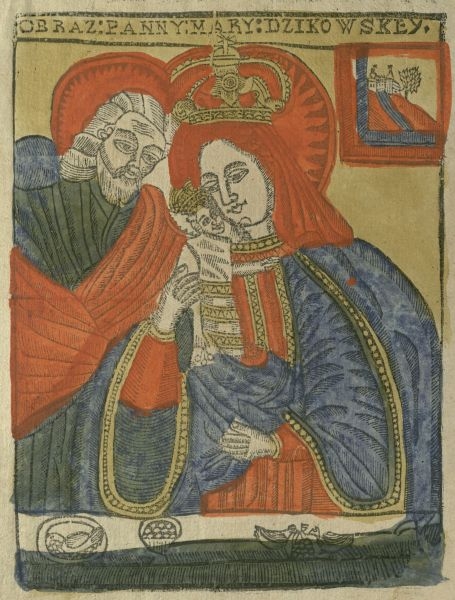 An exhibition of folk woodcuts from the collection of Józef Gwalbert Pawlikowski (1793-1852) has been on show in Seweryn Udziela Ethnographic Museum in Krakow since 12 September 2014.

One hundred and forty-one prints collected in the early nineteenth century are now in Vasyl Stefanyk National Scientific Library of Ukraine in Lwów which took over the collections of the Ossoliński National Institute. These prints have never been exhibited or published in their entirety, and since the 1940s access to them was impossible. As a result, one of the largest and oldest collections of folk prints has been previously almost unknown.

The collection was compiled in the early decades of the nineteenth century, at a time when the last woodcut makers provided their services to the rural population. During this time their products started to be gradually replaced by increasing popular painting on glass and soon by prints which were mass produced in the new graphic techniques (lithographs, chromolithographs). Pawlikowski’s collection was therefore assembled at the very last moment.

The exhibition takes the visitors into the realm of symbolism and aesthetics characteristic of folk art which remains fascinating even today. It is complemented by paintings and sculptures from the collection of the Ethnographic Museum showing common sources of inspiration for folk artists.

The exhibition is accompanied by a comprehensive publication in Polish, Ukrainian and English including texts about the collection, its history and photos of all the presented woodcuts.

The project was carried out in cooperation with Vasyl Stefanyk Lwów National Academic Library of Ukraine
The exhibition and publication were financed by the Ministry of Culture and National Heritage.

Ethnographic Museum in Krakow
Town-hall, pl. Wolnica 1
The exhibition is open from 12 September to 30 November 2014
More information in the Museum press room